send your photos to

This is the programme for Backwell Camera Club into the new year:

is well into its autumn programme and here is details of its next meetings:

The camera club has small exhibitions of its work displayed in the waiting rooms of Tyntesfield Medical Group at its Backwell and Brockway Nailsea surgeries, the New Chestnuts Dental Surgery at Long Ashton and the committee room of Backwell Parish Hall.

All are welcome at meetings at the WI Hall, Backwell at 7.30pm.

New members can learn about club activities with a display of prints, projected images and descriptions of its events and activities of the travel, photo-shoot and practical groups.

Further details of the work of BCC click HERE.

The photo top was taken by Mike on a photoshoot at Clevedon swimathon.

Many members photographs feature on the archived Nailsea Community Christmas Fair 2017 page and on the this and other gallery pages on Nailsea People.

Ian Morrell took several minutes to say thank you to the great and good of Nailsea who attended his retirement party on Friday, December 7.

Chairman Daivd Packham had said earlier: "Ian has been an exceptional town clerk and this has been endorsed by councillors.

"During the 13 years that Ian has been in post he has worked with a number of chairmen and councillors to deliver major projects that have benefited the town.

"These include the restoration of the Tithe Barn, the replacement of the skate park in Millennium Park, the preservation of the Nailsea’s glassworks and most recently the introduction of No. 65 in the High Street.

"This latter project will in particular be Ian’s legacy to the town and it reflects his desire to improve the quality of the lives of the residents of Nailsea.

"Ian has also supported many organisations within the town and fought in their corner when faced with the many difficulties that bureaucracy can generate!
"Ian has also undertaken sterling work behind the scenes within the offices of the town council and is responsible for Nailsea Town Council being awarded Quality Status.

"This award, along with updated procedures, puts us in a strong position and prepared for the future.
"Personally I have enjoyed working with Ian in my period as chairman. He has brought professionalism, with humour, into his role as clerk.

"No matter how challenging the task has been he has always acted in the town council’s best interests."

Ian credited his success as clerk to 'teamwork' and thanked everyone who supported him.

He now intends to work on an ad hoc basis helping at 65 High Street.

ON TAP: The UK's annual tap dancing event Tapathon 2018 is on Sunday, November 18, and 48 super troupers from Nailsea took part. The event at 2nd Nailsea Scout HQ was one of hundreds nationwide in aid of Children in Need. It acted as a great opportunity to tap alongside fellow tap dancing enthusiasts, of all ages and fitness levels in an attempt to smash a current world record and help raise funds for charity. As well as taking part and raising money The Jazz On Tap dance company was attempting to break the Guinness World Record. Jazz on Tap is part of the Nailsea School of Music and Performing Arts and runs classes in Nailsea and Portishead with the emphasis on fun and fitness. The CiN Tapathon choreographed routine is set to the Aston Merrygold - Get Stupid song. Dance teacher Michelle Bedford said: “Our aim for 2018 is for all our dancers whose ages range from seven years to nearly 80 to get their dancing shoes on for Pudsey Bear and help break the largest tap dancing group world record. This currently stands at more than 7,500 participants.” Each participant purchased an official T-shirt which is their donation to CiN from the proceeds and will receive a certificate after the event. Unfortunately the attempt fell short by just 102 dancers - Jazz On Tap will be trying again in 2019...

Children in Need around the town 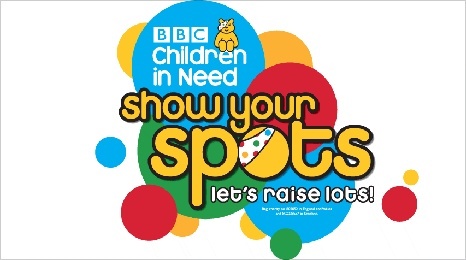